that Fascinates the World The Japanese Quality

Imabari has led the towel industry for 120 years as the mecca of towel production.
The area has established its position as a representative of Japanese quality with its “safe, secure, and high quality” products.
The towels’ softness and good water absorbency have especially gained popularity in exhibits abroad,and its name is recognized around the world.

The Mecca of Towels is Rich in Nature

Imabari, Ehime is a mecca of towels that has continued production for over 120 years.
There are almost 200 factories that twist yarn, dye yarn, fabricate towels, etc. at this great production site.
In addition, the area next to the Seto Inland Sea is rich in nature, and recently is well known as the town where the Shimanami Kaido bridges cross the strait. Increasing numbers of people are enjoying cycling here.

The Soft Water of Imabari Makes the imabari towel Soft

The climate here is warm with abundant water. Imabari’s great environment has helped to nurture one of Japan’s best towel production areas.
Moreover, the underground water of Sojagawa River is soft water with very few impurities.
This water is gentle to the yarn and material of the towel and allows delicate and bright colors while bringing out the natural softness of the cotton used.

Each Step is Full of Skill

Various artisanal skills can be seen in the details of each towel production step including yarn handling, weaving, dye composition, and the unique Sakizarashi Sakizome (dyeing strings first) technique. Without artfully completing each step with care and dedication, a towel that fascinates the world cannot be born.

imabari towel has its own quality inspection method. For example, there is the “five-second rule.” This checks whether a towel sinks after it is placed on water within five seconds. This is a unique inspection used in the area to guarantee “water absorbance” that is characteristic of imabari towel. Only towels that pass such standards can be branded as an imabari towel.

The “Towel Sommelier” system teaches the world about towel quality.

imabari towel introduced a certification system for communicating the quality of a towel to a wider audience. Please see here for taking the sommelier exam.

> About the Towel Sommelier qualifying exam

Red
the color of energy, passion, progressiveness, liveliness, movement, and impact. imabari towel is positioned as a product that is recognized in society and represents Japan.
Blue
the color with a positive image of assured quality, trust, history, tradition, and calmness. This symbolizes imabari towel’s high quality based on its history and tradition.
White
the color of purity with an image of kindness, cleanliness, innocence, healing, and gentle and caring love. This signifies the infinite possibilities of imabari towel.

“More so than being surprised, I was moved.”
In 2006, Kashiwa Sato used an imabari towel for the first time and was struck by its high quality.
“It’s soft with an excellent texture making it very comforting. It doesn’t feel like you are wiping your body.You just need to pat it on your skin and the towel will quickly absorb the water.”
(Source: “imabari towel Kiseki no Fukkatsu−Kishikaisei no Brand Senryaku”)

At the time, imabari towel was in a dire position due to cheap foreign products.
However, Sato was confident.Nowadays, people are more interested in Japanese products due to being cautious about “food safety.” This towel definitely has the quality to be appreciated globally.This was the moment that Sato decided to become the branding producer.

Sato then started the imabari towel Recovery Project.
He produced a logo that symbolized Imabari’s rich nature and hopes for revitalizing its industry, and while using this as a mark to assure quality, he set “white towels” as the key product. He also established new quality standards such as the “five-second rule.”
These were all strategies to protect imabari towel’s true value, “safe, secure, and high quality,” and also spread the word. Tasks that Sato gave sometimes puzzled the members of the Imabari Towel Industrial Association, but eventually brought everyone’s minds together, and created a firm brand.

Later, the strategies based on a firm concept bore fruit, and imabari towel’s brand awareness and sales rose greatly. It truly became a production-region brand that represents Japan.

In 2014, when imabari towel had a booth at the “100% Design” event in London, they used a Japanese ladle to pore water on the hands of visitors. People came, and were naturally smiling when using the comfortable towels at the booth where beautiful white towels were aligned.
Now, imabari towel is synonymous with area rebirth. 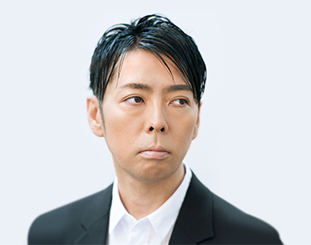 He is our creative director and is participating in the branding branch of the imabari towel Project. He also designed the trademark and logo , as well as some original towel products.